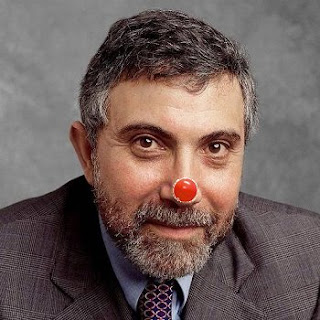 Krugman is a Clown! A total Clown!

""The U.S. government saved the country from a "full replay" of the Great Depression, Nobel Prize-winning economist Paul Krugman wrote in an opinion column in the New York Times on Monday.
"Probably the most important aspect of the government's role in this crisis isn't what it has done, but what it hasn't done: unlike the private sector, the federal government hasn't slashed spending as its income has fallen," Krugman wrote.""

The Recession is over and THEY averted a Depression?
I wonder what this Doctor of Voodo Economics will have to say within about 100 more days?
Posted by SatanSays at 11:52 AM