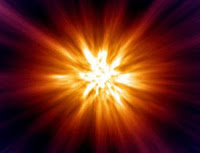 Do not take the big bang and dark energy theories, as the be and end all.
For example, there's a Super Nova every second in the universe, and every two centuries in our own milky way galaxy.
Now according to scholarly estimates, it takes Billions of years to create suns and planets, and then other super Novas, etc etc, however, the Universe was only formed 13.7 billion years ago in the Big Bang NYNY Cult Theorey ?! and will end in another say 20 Billions years? However, it takes around 5 billion years to form a modern solar system like our own complete with a sun etc etc. and the sun has about another 5 to 10 billion years to go. Now we have 1000's of Super Novas going off every day, along with billions of suns being developed over the course of one year from current and future gas clouds... Anybody see a problem here? Perhaps the arrogant inventors of the pompous big bang theorey mean trillions of years, for the age of the known Universe [emphasis on the word known] ? Who knows. I do know that there are some very cult like elements in theoretical Physics. Try to open up a debate with any of these Nabobs, and you will be treated like an ancient heretic of the old Holy Roman Catholic Church.
Physics and the related Schools do not necessarily develop the best of the best. Many get where they are with the help of their Scholarly relatives, I mean take a hard serious look at some of these silly doo dads. Many are just nodding donkeys that are so smart they are stupid stupid. If you want to meet some of the most Arrogant People in the Universe, attend a local Theo. Physics Convention. By the way many of these High End Nabobs actually belong to a NY NY based Cult. If you would like another opinion read THE CULT OF THE BIG BANG, WAS THERE A BANG?
I sincerely believe that the Big Bang Cult will go the way of Flat Earthers and blood letting surgeons of the dark ages. Trust me I'm Satan. 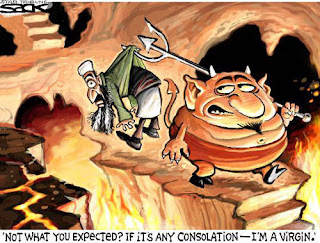 Oh, and on current events...BIG FYI... Bin Laden Laddie has been down here for around 10 years, and he's a real hoot of a furnace stoker, Cat's love to play with him too!
Posted by SatanSays at 5:01 AM